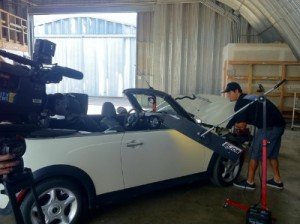 Mirage Paintless Dent Repair is a proud member of the Hawaiian Hail Team. The team was featured on KITV 4 News, after a recent hail storm on the windward side.

Last month when the sky opened and released hail across Windward Oahu, the chunks of ice evaporated within hours. However, the freaky weather left a longer lasting impression. Under a Quonset hut off of Kapaa Quarry Road, the Hawaiian Hail Team is knocking, pushing and massaging out dent damage on vehicles brought into the Kailua shop. “I started chasing hail storms across the United States and one chased me home, I guess,” laughed partner Matt Hayward. Though he jokes, Hayward isn’t kidding. Hayward planned to hunt down the next storm but Mother Nature kept him here. In the days following the hail storm, Hayward, Victor Irizarry and Troy Ginoza — all established paintless dent repair technicians in Hawaii — worked on about two dozen cars and trucks, all targets of hail. “They can be from a pebble, to a silver dollar, to even bigger than that we’ve seen,” Hayward said.

Kailua resident Sally Chaney didn’t have one car hit by hail — she and her husband had three vehicles battered by ice balls. “He said, “Oh my, there’s just so much damage,’” said Chaney. Chaney said she was concerned her insurance wouldn’t cover the repairs, but she says her vehicle’s comprehensive insurance picks up most of the tab. “We only had to pay one deductible for all three, since it was one incident,” said Chaney. The techs don’t use paint; a process they say is not only eco-friendly but the result is a look that is streak-free. Within a day, Chaney’s Mini Cooper convertible is back, blemish-free. “I know a lot of other people had way more damage. So we were pretty fortunate. A couple dings on cars were good,” said Chaney.